Individually, you are required to write a 1500 word strategic report for the executive leadership team in which you are to assume the role of a service experience manager who is in charge of the same tourism and hospitality organisation that you chose for the first assessment.

The purpose of this assessment is to foster students’ ability to predict future conflicts in the macro and micro environments of service-based industries. In doing so, students will practise planning responses to contemporary trends in consumer attitudes, and service experiences, that justify the most effective characteristics of service-based industries and the service economy.

In recognition of the job well done in the previous assessments, presume that you now have been tasked to prepare a strategic analysis of the current consumer attitudes and service experiences trends in light of the transformational economy shift. Individually, conduct in-depth research of the current, peer-reviewed literature and industry publications to determine potential conflicts that this shift may impose on the service design and service-dominant logic for the chosen tourism and hospitality organisation.

Based on your findings, to prepare a 1500 word report in which you must address the executive leadership team. More specifically, your strategic report must include the following:

In composing this report, you must incorporate theories and concepts discussed in the topics from weeks 1 to 12. The findings presented in this report must be based on scholarly, peer-reviewed and commercial sources of information that were published no longer than 5 years ago. You may also include appendices section to justify and support your research (not included in the word limit). You are required to use at least 12 sources of information and reference these in accordance with the Kaplan Harvard Referencing Style. Wikipedia and other ‘popular’ sites are not to be used.

The report had been about the changes in the service design planning that Crown Towers Hotel needed to implement in order to maintain the values it had been delivering to its consumers. The hotel had been delivering excellent services to the consumers in terms of warm hospitality and unparalleled amenities to its loyal consumer base. However, the present pandemic situation had led to a transformational shift in the economy which had led to a change in consumer behavior. The macro and micro environments had been changing due to the present scenario which had been creating potential conflicts for Crown Towers Hotel. The report had looked into some of the strategic recommendations that had been suggested to the hotel in order to address the conflicts and resolve them.

The tourism industry is a dynamic and high paced industry which is undergoing rapid transformations in trends which also comprises the customer needs and profiles. The demands and expectations of the customers have been undergoing rapid change as they are becoming more educated and sophisticated about their basic requirements and amenities. Now it has been increasingly important about the quality of the services the industry is catering to its customers, and that is now what is defining its competitive advantage. Moreover, the industry also needs to look after the potential conflicts that may arise in the macro and microenvironment due to the changing trends in the industry. Crown Towers Hotel which has been delivering quality services and amenities to its consumers, needs to look into these considerations and bring about a change in their service design planning.

The global pandemic after the outbreak of COVID-19 has created an overwhelming effect on the lives and livelihoods of the people around the world. Now, this has been creating a change in the demands and expectations of the consumers from the tourism industry especially the hotel industry. So the industry has been forced to rethink what the concept of customer care means in the present scenario. A sudden change in the perspectives of the consumer has led to the urgency to address their needs by the hotel industry in order to retain their consumer base.

According to Hwang and Seo (2016), in such times of crisis, the hotel industry needs to think of effective communication between the consumers and the hotel can generate a prompt and enduring effect on the sense of trust and loyalty of the consumers to the hotel. Now it is the scope for the hotel industry to analyze how they should position themselves in this time of crisis, in order to deliver the services and experiences to their valued consumers.

Crown Towers Hotel has been delivering valuable services to its consumers in terms of warm hospitality and extravagant amenities. The hotel needs to bring in some changes in its service design planning especially when the economy is going through a transformational shift. The interaction with the consumers is going to be fundamental for Crown Tower Hotels especially during this time of crisis as it helps to co-create values with the consumers.

Vargo et al. (2020), opined that the service-dominant (S-D) logic helps to co-create values with the customers, which the hotel can utilize to motivate the consumers and actively engage them in the process of value creation. The consumers can submit their ideas and perceptions about the services offered by the hotel, which they can utilize in redesigning their service planning, to build resilience in these hours of need.

The transformation economic shift is one more aspect which the Crown Towers Hotel needs to look into in order to make a change in its service design planning. The economic slowdown during this global pandemic has been a major reason for the reluctance of the consumers in availing of premium hotel services. Kung and Zhong (2017), argued in this respect, that the hotel can think about their pricing strategies, by implementing some cost-cutting techniques and reducing the room charges and other expenses for the consumers. However that should not compromise with the good customer experience which they used to get from the hotel, and this very aspect has been creating substantial value for Crown Towers Hotel. The best way to maintain customer experience as well as deliver quality services to them, can be the digitalization of its services and introducing smarter operational trade-offs. The hotel can also promote the offers that they are going to provide to the consumers on their official website, and can also offer attractive discounts to the consumers booking online.

Potential Conflicts in the Macro and Micro Environments

According to Glowik (2017), the analysis of macro and micro environments is quite important in order to understand where a company can take advantage and where it needs to defend itself, in order to realize the objectives and accomplish success. A potential conflict arising between these two environments can have a severe impact on the company. The changing consumer attitude is going to have an impact on the operations of Crown Towers Hotel, as it relies mostly on providing quality services and amenities. The hotel has been analyzing the behavior and attitudes of the consumers in order to bring about a change in their offerings, in order to deliver a unique experience to their consumers. However, the transformational economic shift during this global pandemic situation, may not make it possible to bring about an overall change in their service offerings. The funding mechanism required to provide luxury accommodations and impeccable amenities may be affected by the economic slowdown. In this respect, the quality of the services provided by the hotel might be degraded which can in turn affect the reputation of the hotel. Again the hotel in order to maintain its image also cannot downgrade the quality of services and amenities, as they are primarily targeted for the affluent and premium consumers in the market. 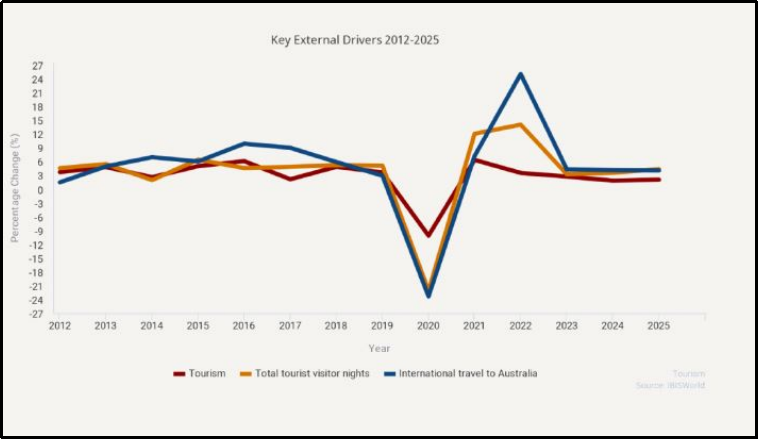 Caber, Albayrak, and İsmayıllı (2017), stated that the competitor analysis also forms an important microenvironment parameter for an industry that needs to be analyzed in detail. Crown Towers Hotel needs to understand how its competitors in the Australian hotel industry are changing their strategies during the times of global crisis. The big names of the hotel industry like the Hilton, Marriott, and Hyatt have always been devising strategies in terms of pricing of their services and the quality of services they offer to the consumers. And it is thought that it is going to be no different in this situation also, and this is going to be a potential challenge for Crown Towers Hotel.

Arasli et al. (2017), argued that the macro-environmental factors are the ones over which the industry has no control, but it definitely has an impact on the industry. The PESTEL analysis reveals the macro-environment parameters that have an impact on any industry (Pan, Chen, and Zhan, 2019). In this respect, the economic factors are going to have a major impact on the operations of the Crown Towers Hotel, as the global pandemic situation has caused an economic slowdown. Overall this is going to lead to inflation in the prices of the raw materials on which the hotel is dependent to provide services. And this is going to affect the profitability of the hotel. The political factors are also going to be a potential challenge for the hotel. Even though the government of Australia has been quite supportive of the hotel industry, it helps to generate a lot of revenue for the government by attracting tourists. However, the hotel has to pay a considerable amount of money as a luxury tax to the government. And if the government happens to increase this tax during this transformational economic shift, then the economy of Crown Towers Hotel will be greatly affected.

The potential problems that can be faced by Crown Towers Hotel have been identified and the leadership team should look into the following strategic recommendations that can address the potential conflicts in the macro and micro environments:

The report in the end helps to conclude that the hotel industry has to face a changing dynamic in terms of consumer attitude and profile. So it is quite important for luxury hotels like the Crown Towers Hotel to look into the changing perceptions of the consumers and adopt effective measures in order to bring over a change in the service design planning. The macro and microenvironments of the hotel are also quite essential in defining the success of hotels like the Crown Towers Hotel and in order to continue delivering value to their consumers. The report also looks into some of the strategic recommendations which Crown Towers Hotel can implement in order to address the potential conflicts that can arise in the macro and micro environments of the hotel.