year on Wednesday, as higher domestic airfares more than made up for a growing fuel bill.”

The above quote was taken from an article late last year (before the events of COVID19) indicating domestic airfares have been on the rise. The diagram below details the market share of the domestic airline industry in Australia. 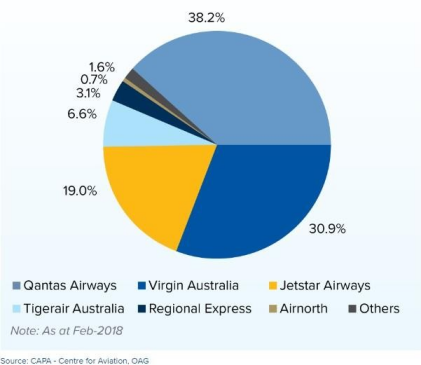 Answer the following questions regarding the airline industry. Present you answers as a report of no more than 2000 words. The report should have an executive summary, an introduction, a body, and a conclusion. Ensure that the report is referenced correctly, and all diagrams labelled. Any late assignments will incur a 10% deduction per day. In concluding your report, make a recommendation back to the government in whether they should help certain players in the industry and why.

“Australia's number-two airline revealed improved earnings and revenue in the first half of the year on Wednesday, as higher domestic airfares more than made up for a growing fuel bill.”

The above quote was taken from an article late last year (before the events of COVID19) indicating domestic airfares have been on the rise. The diagram below details the market share of the domestic airline industry in Australia. 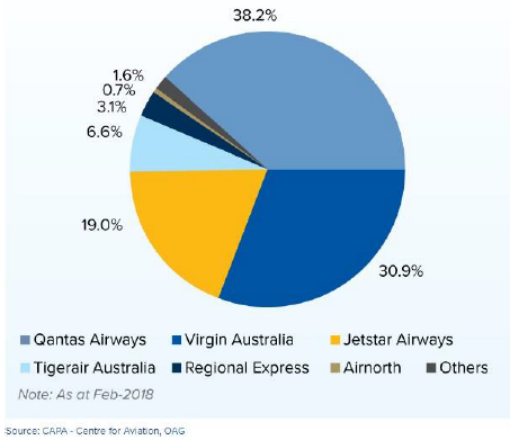 The diagram indicates high concentration as market is dominated by Qantas Airways and Virgin Australia.

However, with COVID-19 pandemic, the already struggling and debt-ridden Virgin Australia has been forced to go into voluntary administration. This has multiple effects on the airlines industry, the states where it provided employment as well as consumers who may face higher price tickets due to its closure. The following report discusses all of this.

The following report discusses Airline Industry of Australia. Specifically, the report will discuss the market structure which is in force in the Australian airline industry. The same will be discussed in light of various economic concepts learnt. The Herfindahl-Hirschman Index (HHI) will be used to determine the extent of concentration in the airlines industry.

Further, the report will also discuss the case if Virgin Australia quits the market due to almost zero airline traffic currently because of COID-19 pandemic. Further, the hypothetical scenario will be considered if the market share of Virgin Australia is taken up by Qantas Airlines. The impact of this scenario on ticket prices will be discussed with respect to various economic concepts.

Then, another scenario will be discussed whereby NSW will help the Virgin Australia airlines with a bailout package so that it is able to maintain the market share. The impact of same will be discussed with respect to the industry and Qantas Airlines.

Market Structure of the Airline Industry

HHI is commonly used to measure the degree of market concentration and also market competitiveness. It is particularly useful when a market undergoes consolidation or entry of a major new player or some merger and acquisition activity occurs which leads to change in structure of the market. The index is calculated by squaring the market share of each player in the market and then taking a sum total of resulting numbers. The output can range anywhere from zero to 10,000. Lower the value of HHI, more competitive the market is and higher the value of HHI, more concentrated the market is (Hayes, 2020).

For the case of Australian airlines market, HHI is calculated as follows:

The HHI value is 2,831.3 which is higher than 2,500. This indicates that the Australian airlines industry is highly concentrated.

The HHI value is 4,690.8 which is much higher than 2,500. This indicates that the Australian airlines industry is highly concentrated.

Hence, the HHI value is higher than 2,500 in either case whether the low cost wholly owned subsidiaries are combined with the parent company with respect to market share or not. Hence, this indicates that the Australian Airlines industry is highly concentrated with two dominant players, namely, Qantas Airways and Virgin Australia.

The beginning of 2020 has seen a massive outbreak of Corona disease or COVID-19 for short. As of May 16, 2020, almost 4.5 million confirmed cases of the disease have been reported globally by World Health Organization (2020).

Due to COVID-19 pandemic, most of the industries have been shut-down and facing huge losses. This is particularly true for the airlines industry where flights have been grounded for a while now with practically zero demand. While airlines in various countries are fighting the situation of heavy losses, this has been particularly bad for Virgin Australia which was already cash strapped and under pressure to perform financially. The airlines tried scrapping unprofitable routes, shutting down international routes, laying–off employees, closure of TigerAir etc. (Khadem, 2020). But the loss of demand due to COVID-19 forced Virgin Australia into voluntary administration on 21st April, 2020 when the government refused to bail-out the airline. The debt-ridden airline company plans to keep operating while handling over to the administrators such that it can initiate a restructuring process by acquiring refinance (Gage, 2020).

Now that the government has refused the requested $1.4 billion bailout package and the company’s major investors such as Etihad Airways, Singapore Airlines, HNA, NanShan and Virgin UK are also unwilling to invest in the debt-ridden company, the company is left with very limited options to revive itself. Mainly, private investors are the chance that can help the company. The state governments such as Queensland, NSW, Victoria offered bail-out packages with some riders but the amount was insufficient to help the company stay afloat (CAPA, 2020).

Another option is that Qantas Airways takes up the market share of Virgin Australia as well. However, this will lead to very high degree of concentration in the industry as indicated by HHI below:

As seen above, Qantas Airways will practically create a monopoly with 94.70% of market share. The high degree of concentration is indicated by the HHI that is as high as 8,980.8

Once the COVID-19 pandemic settles down and airline industry sees demand coming back to normal, the above scenario will leave Australia with a single major player, that is, Qantas Airways. Hence, the market structure has changed from earlier being an oligopoly to now being a monopoly. Qantas Airways has now become a price maker and will charge higher ticket prices as customers are left with no other choice. This will increase the Company’s profit at expense of the customers creating deadweight loss in the process.

As discussed earlier, the state governments such as Queensland, NSW, Victoria offered bail-out packages with some riders but the amount was insufficient to help the company stay afloat (CAPA, 2020).

Initially, Queensland offered $200 million package to the company on the condition that company will remain headquartered through Brisbane. However, New South Wales soon entered the scene and offered to help the company provided the company shifts the headquarter to Sydney and focused efforts on second airport which is due in 2026. The Victorian government also offered around $500 million with the condition to acquire company’s assistance in making Melbourne’s second airport operational (CAPA, 2020).

However, all of these packages were way short and could not have helped the company to stay afloat. The Company had requested $1.4 billion bailout from the government which was rejected.

The company’s corporate headquarter is currently in Brisbane, Queensland. Due to lay-offs and shutdown, the state is already facing huge economic losses, not to mention unemployment. It is in the interest of the state if company an stay afloat as it offers employment to large populace. Additionally, if Virgin Airlines stays afloat then the airline industry will continue with current market structure with two major players, namely, Qantas Airways and Virgin Airlines. If Virgin Airlines closes, then Qantas Airways will effectively become a monopolist which is not in interest of the consumer and state. Hence, the state government’s interest to keep the Company afloat.

From the Company’s perspective, it will be beneficial if it can acquire a bailout from the state, be it Queensland or NSW or victoria. The company is cash strapped and needs assistance immediately.

However, since the company is currently headquartered through Brisbane, it will be difficult to move to Sydney. The bailout also comes with rider to focus on second airport.

Hence, the bailout package will be good for Virgin Australia as well as for the industry as it avoids change in the current market structure. However, it may lead to loss of opportunity for Qantas Airways in terms of market share as well as an opportunity to charge higher as monopolist in the Australian airline industry.

The above report discussed market structure of Australian airlines industry which is oligopolistic structure (duopoly) with two major players, Qantas and Virgin Australia. This was verified with calculation of HHI that indicated high degree of concentration.

The above report also discussed the situation of Virgin Australia and how it has financially collapsed. The company was already struggling and outbreak of COVID-19 provided to be the final blow. The company was forced to go into voluntary administration. The requested bail-out package was rejected by the government and the major investors also did not come to rescue. Now, the company is left to mercy of private investors.

However, due to its unique position as the second largest player in the Australian Airlines industry offering large employment opportunities to Australians, the states are eager to help the company stay afloat. The collapse of Virgin Australia will offer a big opportunity to Qantas Airways to become a monopolist with virtually entire market share.

Hence, it is in the interest of the Australian airlines market as well as the states that Virgin stays afloat.