Assessment purpose: To enable students to research, critically analyse and evaluate the macroeconomic performance of Australia. This   assessment contributes to Learning Outcomes b, c, and d.

(2) How has the movements in the fiscal position and cash rate from 1st July 2001 to 30th June 2020 discussed in (1) influenced the unemployment rate in the same period?

(4) Given the insights gained from (1) — (3), do you think that the Australian government's unprecedented fiscal spending during the COVID-19 pandemic would help the economy to recover faster than otherwise? Critically discuss.

Students need to support their analysis with a minimum of 10 academic journal articles plus the text. Students aiming for a Credit or higher grade will need to use more sources. Articles should be relevant and recent. Non-academic journal sources may also be used, but relevance and validity should be clarified with the lecturer/tutor.

The following report discusses key macroeconomic indicators in Australia during the past two decades, that is 2000 till 2020. The special emphasis will be on fiscal deficit, unemployment, cash rates and exchange rates. Further, the interrelationship between various factors will be analysed with focus on COVID-19 pandemic and impact of the fiscal stimulus doled out during the period.

Fiscal Position of the Australian Federal Government with respect to the Cash Rate from 1st July, 2001 till 30th June, 2020

The net lending (or borrowing) as a percentage of GDP of Australia is presented in the below graph for the period of 2001 till 2020 (World Bank, 2020): 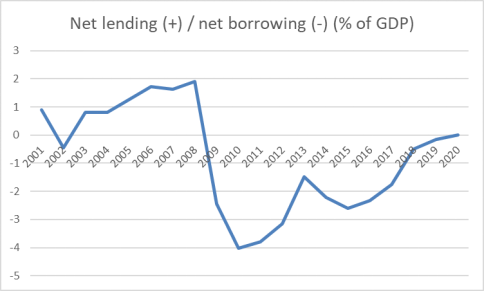 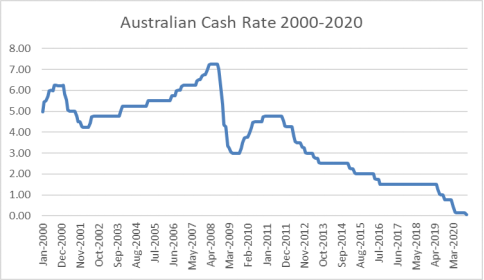 It can be seen that the cash rate for Australia has continuously declined from around 5.00% during the period of January 2000 to 0.14% during the period of June 2020 (except for peaking around mid of 2008 when the economic recession caused the rates to crash later). Cash rate refers to the rate of interest that a central bank, such as the Reserve Bank of Australia charges to commercial banks in the country for loans. It is popularly also known as the base interest rate or the bank rate. This is because the cash rate is used as the base by commercial banks in order to arrive at the interest rates they will charge to the consumers.

A very high level of fiscal deficit may not be good for an economy because the excess borrowings can lead to increase in interest rates and also crowd out private investment in the process. Ultimately, this can shock the economy to recede. Additionally, there is evidence to indicate that fiscal deficit and rate of interest are positively related, especially in the long run (Rani & Kumar, 2017).

The positive relationship is clear from the above graphs where both interest rates and fiscal deficit seem to be moving in the same direction. 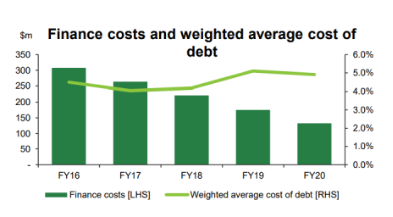 As discussed above, an increase in fiscal deficit is believed to increase cash rates or interest rates and also lead to crowding out of private investments. However, a slight fiscal deficit in long run may actually help the economy to grow and reduce unemployment. In fact, in order to reduce unemployment, sometimes a government may be willing to increase the deficit just so to provide employment to the people of the country. This was well seen during COVID-19 pandemic where multiple stimulus packages were provided so as to help keep people employed in these testing times. The companies were encouraged to keep employees on the roll while claiming subsidies and benefits from the government’s fiscal stimulus packages whereby government paid in full or in part for the employees’ salaries and wages (Dang & Wayas, 2018).

Movements in Target Cash Rate from 1st July, 2001 till 30th June, 2020 and influence on the Australian Dollar 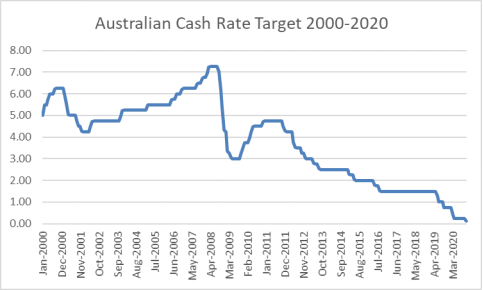 The following graph presents movement in Australian dollar with respect to the US dollar for the period of 2000 till 2020 (RBA, 2020): 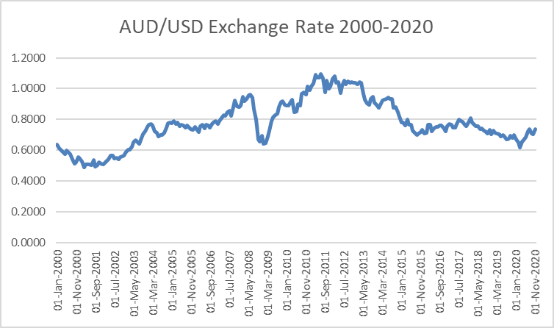 As of March of this year, Australia had provided fiscal stimulus packages to the tune of $190 billion which accounts for almost 10% of the GDP. This has helped in controlling unemployment to a large extent and also increasing purchasing power through tax cuts and reduced interest rates in the economy.

However, the huge deficit created in the economy will not be an easy luggage and it will take years for the economy to recover from the setback. It will not only lower the growth rate of the economy but may also lead to depreciation of the exchange rates. The economy may be less attractive to investors due to low interest rates. However, given the current scenario, there would have been very few alternatives other than fiscal stimulus so as to stop the economy from plunging into recession.

From the above discussion, it was found that various macroeconomic key indicators such as fiscal position, cash rate, cash rate target, unemployment and exchange rates are intricately linked to one another. Changing one indicator with an intent to help the economy may sometimes not have the desired impact or impact may not be as strong. This is because of inter-relationship of various factors. Hence, economy is quite complex and fiscal deficit may sound negative but may be actually good in long run. But fiscal deficits as large as seen during COVID-19 pandemic may be counter productive in long run if the fiscal policy is not managed proactively.