ULO 5: Identify and critically assess key security and data verification issues related to the creation and maintenance of computer networks.

You are required to write a report that proposes a network design that meets the business and technical goals of an organization. This assessment is to be done in groups of four to five students.

The word limit of the report is 3000. It should be written in size 12 Arial Font. You must submit your own work and use appropriate references in Harvard style where needed. The similarity index of your report should not be more than 20%. You must email the group names and chosen organization to your instructor by week 8. Instructor will discuss the project with each group in the online sessions of week 9 and week 10.

HOW TO PRESENT YOUR ASSIGNMENT / SUBMISSION INSTRUCTIONS

In this assignment task, we are going to design n computer network for small to medium size network organisation. We have selected aih.com company which is situated in Australia. Aih.com is an information technology based company dealing with IT equipment all around the Australian states. The company recently acquire two new office buildings at nearby state (namely site 1 and site 2). Those offices are required to be configured with a new network design and connected with the main head quarter office, named as site 1. The head quarter office (site 1) is already configured with a network topology but with this configuration, they also required to upgrade some of their basic services to support the new network configuration with redundancy and high performance. All the three sites are connected via a high speed WAN link, provided by the ISP. Security of the network is their main concern that need to be additionally focused on. This include security of their internal devices such as servers, router or switches, authenticated access of organisation resources with meeting good performance. We are tasked to design a logical network that suites their business as well as meeting their current and future requirements. We select a proprietary cisco technology and design the network based on the evaluated business and technical goals of the aih.com organisation. A logical topology diagram is prepared and presented in the report that shows all the different aspects of our selection and topology design. Various networking component i.e. hardware and software, are needed to design this network. A complete detail of the selected network topology and hardware equipment are described in this report in hardware and software section.

In this assignment task, we assume an organisation named aih.com. aih.com is working in sector of information technology and deals with the information technology equipment. The organisation currently situated at single working location and recently acquired two remote offices. The remote office sites are having no basic network connectivity. So, the aih.com want to install a high performance and well secured network for the new sites (site 2 and site 3). With this new network configuration, they also want to upgrade the main office site (site 1) which is running using several older technologies. The aih.com has three main departments where all their employees are resided. The departments are sales and marketing, IT and management. There are 200 employees works in sales department, 45 employees work in IT department and 26 employees are belong to management department, at their main office site. On the new sites, there are same three departments with 50 employees in sales, 12 employees in IT and 8 employees in management, in both the sites. By acquiring the new offices, they desire to increased their area of servicing, to the new geographic and have competitive advantages by implementing new network technologies.

The key business goals of the organisation are described here –

The key technical goals of the organisation, with the implementation of the new network design, are here –

After analysing all the technical and business requirements of the aih.com, we did some research on the networking components that can be used in our network designing. For designing a small to medium network, an essential device that need is a router. That provide the basic connectivity between sites via WAN link, connect and communicate different departments that are resides in different subnets and control their access of organisation resources. A router is somehow a starting point of a network and preferably placed at the edge of the network. For a wired ethernet connectivity, we need some switches. Switches are called advance hubs that has so many advance features, now a days. A switch is layer two device of OSI layer that can be work on layer three and handle so many features like a router. Switch is used to connect the end user devices in our topology by ethernet cables. VLANs are configured and managed on these switches. An ethernet cables are used in this network topology design to create connection between devices and end user systems. This cable is responsible of good amount of throughput speed and proper connectivity between devices. To implement security in the network, we use firewall at the starting of the network, just after the edge router. A firewall is a security device that restrict the access of users, internal or external, in the network. Firewall works based on access rules and allow or deny the access of resources i.e. server services, systems or network. It helps restricting any unauthorized user in the network based on the configured firewall rules. The above discussed components are essentially used in our network topology to meet our organisational requirements. Besides this several other components are also used in the network such as server, desktop computers, printer etc.

After analysing the above discussed network components, we search for the best suitable network topology and technology to be used in our network design. The complete network is build using ethernet cables and create a wired network. For this ethernet network, we select hybrid mesh network topology with following the cisco’s three layer hierarchical model. The main network is built using the hierarchical model. This model uses three layers namely core layer, distribution layer and access layer. The core layer resides at the edge of the network and starts with the core switch. This core router is responsible of connecting the internal organisational network with the external or outside network (internet) and configured with several initial security for WAN link and access of internet. After the core layer, a router is placed in the distribution layer. This distribution layer router connects the core router to the access layer switches. This layer is responsible of additional access control between departments for internal organisational resources. So many services can be configured on this layer such as network DHCP, access control list (ACLs) etc. A firewall is placed between both of these layers. That control the access of internal or outside users. There are so many access control policies are configured on this firewall for this purpose, based on the organisation requirement. These configured firewall policies allow or deny the users going out or coming inside the private network of that site. Several access layer switches are placed after the distribution layer router. These switches are belonging to different department and providing cable connectivity to the end user devices. A number of switches can be placed at this layer according to the host and device requirements at that department. The access layer switches create a hybrid mesh topology design. That connect all the ned user devices in any order where they are placed according to user convenience. 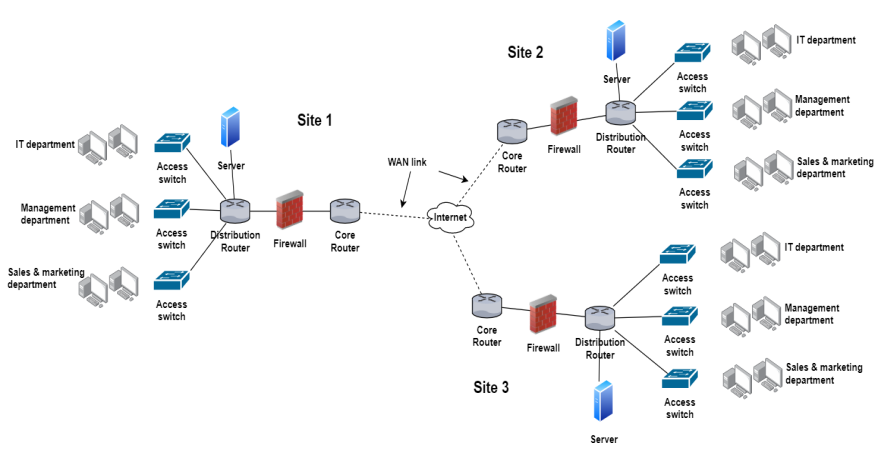 The above network topology design is prepared for aih.com for its three sites. Site 1 is the main site that is upgraded in terms of security and topology level. Site 2 and 3 are the new sites where we build a new network topology. A core router is placed at the starting of the network at the sites that connected with the ISP via a WAN link. This WAN link connect the three sites with each other. After the core router, a firewall is placed that is further connects with distribution router. Several access layer switches are connected with this distribution router. We use only three switches in this topology that belongs to three departments namely IT, management and sales & marketing department. Every site has its own server that handle email, web or database services for that site. This server is placed at the distribution router and protected with access security. All switches are configured with VLANs, a total of three VLANs are created namely IT, MAN and S&M that belongs to IT, management and sales & marketing department respectively. For better throughput speed, we use advance ethernet cables that provide enough data rate to do their daily tasks of business. While designing the new network, we use proper security via firewall, ACLs, VLANs and DMZ for servers and better performance of network with redundancy and resiliency.

In this section, we will discuss about the software and hardware, that are used while designing the required network topology. Here is the detailed list of the required devices.

In this exercise, we design a new network topology for an organisation aih.com, for its three sites. That include its main office site (site 1) and two other sites (site 1 and site 3). We first analyse organisation’s business and technical goals and based on the analysis, research for a preferred networking architecture. The proposed network design is built with cisco’s three tier hierarchical model and hybrid mesh network topology and the user end. This combination of technologies is capable of meeting all their networking demand. According to the three layers of the model, three layers of devices are installed and configure with the required hardware such as switch or router. For security, we implement access control over routers and used a firewall at each site location. To maintain performance of network, high capacity of devices is used that deliver better throughput speed and performance in the network. All the details about the used devices in the new network topology is describe in the hardware and software section of the report. The prepared network design is fulfilling all the current and future requirements of the organisation, aih.com, meeting demands like security, good performance and controlled access of organisation resources.