You are a business analyst and have been engaged by Bank1 to do a Post-Project review.
The assignment asks you to:

Here is a suggested assignment structure to help you

Tell the reader what you are going to do: e.g.

Apply the following Knowledge Areas of the BABOK (enterprise analysis, elicitation, requirements analysis and solution assessment and validation) as a lens to analyse why the architects in Bank1 were unable to build stakeholder commitment and support for the enterprise architecture implementation (EAI).\

Tell the reader why you are going to apply the Knowledge Areas of the BABOK: e.g.

To demonstrate that the competencies associated with business analysis work are applicable to other areas of IS practice such as enterprise architecture.

Tell the reader the contribution that you are making to IS practice: e.g.

Paragraph 3: Describe the Knowledge Areas of the BABOK

Using the Business Analysis and Planning Knowledge Area, to what extent did the architects get stakeholder support for:

Using the Enterprise Analysis Knowledge Area, to what extent did the architects’ approach enable them to understand that stakeholder requirements can change over the course of a project?

Using the Requirements Analysis and Solution Assessment and Validation Knowledge Areas, to what extent did the architects’ isolationist approach prevent them from understanding that stakeholder requirements can change or vary from one community/ group of stakeholders to another?

Paragraph 8: Using your analysis of the case study based on your application of the Knowledge Areas, analyse why the architects were unable to build stakeholder commitment and support for the enterprise architecture implementation.

Paragraph 9: As an IS practitioner, what would you do differently?

The present assignment applies the knowledge areas of BABOK to present a business analysis for the formation of new hardware and software architecture at Bank1. Application of knowledge areas such as elicitation, assessment of solution, Requirements analysis and Enterprise analysis can evaluate the reasons responsible for not developing stakeholder trust and support for the proposed EAI or Enterprise Architecture Implementation.

The assignment delves into the knowledge area of strategic analysis to identify the current project status and strategic changes required to derive the project goals. The part of requirement analysis can evaluate the presence of ARB and features of EAI to outsource the software and hardware arrangements. The knowledge area of defining the design can also potentially criticize the shared framework of knowledge that has been part of the technology architecture.

In the beginning of 2011, the Bank1 CEO that serves a wide network of more than 48,000 customers is different financial markets of Europe, Middle East, Pacific and US, announced a planning to consolidate the organizational structure by merging 16 business units into four. The organisation planned this strategy to be a long-term one, so that the bank can facilitate the international services efficiently focusing more on shared knowledge and information among the stakeholders on common platforms.

As per this announcement, the architects planned for the new structure of hardware and software facilities for four and a half months to prepare a set of integrated enterprise architecture model. The architecture team started controlling all the technology projects in the organisation through ARB or Architecture Review Board to get management control on this area. However, the senior executives of the organisation were not willing to approve funding for implementing EA, because of which the programme has gotten stalled since the end of 2011. In this respect, the knowledge areas of BABOK is applied in this business analysis to evaluate reasons of failed stakeholder commitment and trust or support.

BABOK is the globally standardised set of business analysing practices that to guide professionals so that they can acquire solutions on business outcomes. This guide has been presented by IIBA or International Institutes of Business Analysis at the end of 2015. The practices suggested here are international by standards and are capable to conduct in-depth analysis on business situations at international organisations. 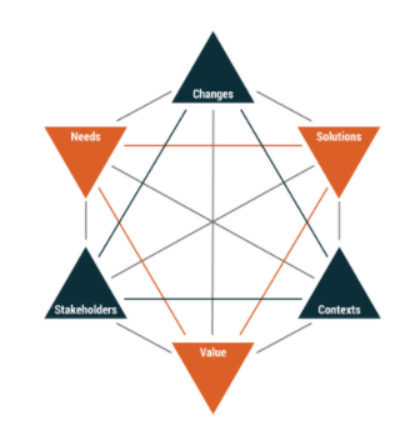 In the stalled architecture project at Bank1, the model is applicable as the operations of the organisation is stretched in a wide area covering markets of US, Pacific and Middle East. In the case study, the interviews taken of the architecture members and management of the organisation has revealed that the Senior Architect had issues in deciding on the management authority of operational process due to differences in European ways of honouring agreements. The approach of international business analysis standards under BABOK is appropriate to critically analyse the situation (Meredithet al. 2019).

The initial planning and designing stage of the architecture has seen a mutual understanding among the architects and the stakeholders. For example, the Deputy CEO of the bank has always been present in meeting organised for finalising the technologies and design. However, the Senior Architecture and his team were always forceful in highlighting their suggestions and planning by ruling over the 25 member team and the ARB. The architecture team decided to stop any ongoing or future technology projects in any market of the Bank1 so that the proposed EA can work out smoothly.

The team placed the deliverables to complete the project within 2011. However, they demanded a complete management authority over the technology development in the organisation. This is where, the organisational management lost their trust of the planning and design of the Architect. It resulted in their reluctance of not willing to fund the project designed by the senior architect.

The team planned to monitor the implementation of the architecture through the ARB. The architect team effectively used this committee to filter and stop any technology projects that were or was going to be implemented in any markets or country. The senior architect has admitted in the interview that he and his team always wanted to move fast and to be proactive with the designing of the EA so that their efforts can be visible.

Elicitation and Requirements Management and Communication

At the stage of designing the EA, the architects have identified and recorded the principle objectives in the architecture for the software under COTS (for commercial use) and other hardware products. They have also used evaluation templates to understand the importance of these software. It is odd to find out that the architecture team has not included the people that have contributed in the design of these technologies. Along with this, the architects have looked into the strategic alignment, project scalability and flexibility to highlight the improvements in the existing technology portfolio of the bank.

The architectures and their approach draws criticism as they have failed to capture the complete value of requirement management as they have hardly included the people that have played important role in the designing and have direct knowledge of the organisational technology (Kravchenko and Bruskin, 2017). Hence, they have missed the important aspects of the business operations, while designing the final software and hardware products.

The efforts of the architect team becomes initially visible in the designing stage. However, in the later stage their communication with the management of the bank has turned into a strained communication. As per Dale and Scheepers (2020), the success of an enterprise architecture largely depends on the understanding of the architects with the capability of generating stakeholder commitment. The authority of the architect team have not even bothered to be present for the overall meetings in later period and only communicated to the organisational representatives when any architect has wanted to know some details. Hence, their communication attitude has created an environment of disengagement in the enterprise. Though, this kind of behaviour can be explained by the tight schedule and deadline for only six months posited by the Bank1, that they could not make any extra efforts to build up stakeholder engagement.

The senior architect has fallen short of capturing the pulse of the management authority at Bank1 from the beginning. During his interview with the business analyst, he has pointed out that it was beyond his imagination to ask for the funding of the enterprise architecture in a different meeting with the management (Park and Jeong, 2016). This is so because as per the spirits of European way of honouring an agreement goes, it is the responsibility of both the parties to go along the terms and condition of the contract, once it is signed. However, the architect team has been unable to understand that during the design and planning period they have not been able to track and include the stakeholder expectation rationally. They have not considered the psychological factor of stakeholder trust that varies according to the features of different cultures.

Incapability of the architecture in getting stakeholder commitment and in EAI

After the design of the EA got over, the architect team has single-handedly decided on the execution and implementation plan. None of the later decisions have involved any consultation with the stakeholders (As influenced by Jarzębowicz and Marciniak, 2017). This is where, they have isolated the trust and communication factors with the stakeholders. It has been a mistake on the part of the architects as they have missed that as per the organisational culture of the Bank1, it is necessary to collaborate closely with the technology team to ensure project deliverables in each case. Even the architect team has not bothered to discuss the scopes for the responsibilities of EAI with technology stakeholders. These acts have risked the collaboration process that has failed the project progress.

Things could have done differently

The architecture team that was responsible for the EAI, missed the opportunity to build up an environment of trust with the organisation. The role of chief decision making body could have been acquired by promoting an environment of trust. Taking part in the funding process for the hardware and new software systems can build up the confidence in the coordination of the Architecture team with that of Bank1. The alternative way of managing the project differently could have been successful by defining rational approaches to stop, start and cancel any technological programs at the Bank1. Architecture personnel can also maintain a regular and close companion with the team.

The study regarding enterprise architecture implementation has allowed to understand that in order to complete the technology project deliverables, a close collaboration between the architects with the stakeholders. The knowledge area of Requirements Analysis has pointed out that the lack of regularity in the stakeholder communication has affected the trust and understanding with the stakeholders. Lack of communication has also harmed the scope of the architects in understanding organisational values and culture of Bank1. The study has evaluated the reasons of this stalled project under the knowledge areas of BABOK standards of business analysis, which is accepted globally.