HI5003 The Market Structure Of Coles And Woolworths Assessment Answer

economics knowledge learned in the course unit to compose a company report.

The recommended assignment structure for final submission is as follows:

Note*: The structure content is not limited to the items listed above. Creativity for a better report structure is a key requirement.

Detailed requirements of the assignment

You are a group of advisors to the Management Board in your company with Headquarters in Australia. As advisors you are first, required to conduct research on your selected sector/industry covering the previous 5-10 years. Second, you are required to present a company strategy to your Management Board covering the next 5 years. Third, your Management Board requires that you make a presentation of your findings and strategies, and you prepare a 2,500 word market report. The market report should, as a minimum, address the following key issues:

Note: if your company has many products and/or services, you can select a representative product/service to discuss for points (2); (3); (4); and (5).

This report should provide useful information for your company’s Management Board. It should use a variety of resources, including the textbook, newspapers, industry reports, the ABS website, and other sources.

Furthermore, your report should include headings and sub-headings. It needs to be properly referenced using the Harvard style and at least 5 references.

THE MARKET STRUCTURE OF THE COMPANY

As discussed above, Coles group operates in the supermarket industry of Australia. According to the draft report by the Australian treasury 2018, more than 80% of the supermarket sector revenue is generated by four big groups (AC, 2018).

Coles and Woolworths are the two biggest groups in the supermarket sector holding over 65% of the market share (AC, 2018). The huge market share by the two giants significantly impacts the retail sector with their practices (Keith, 2012).

Coles and Woolworths are established players in the Australian supermarket industry. ALDI, a budget-friendly option entered Australian supermarket space in 2001 and since then has grown tremendously. Its impact has been felt in Australian supermarket already by changing the pricing through availability of low-cost products. In order to differentiate their own products, Coles and Woolworths have now started focusing on better experience, both in-store and online. Technology as well as marketing and promotional strategies is being applied to capture as much market share as possible. Hence, the market is characterized by fierce competition and ever changing business models.

According to IBIS (2018), the market share of Australian supermarkets and grocery stores was as follows:

This can be presented graphically as follows (IBIS, 2018): 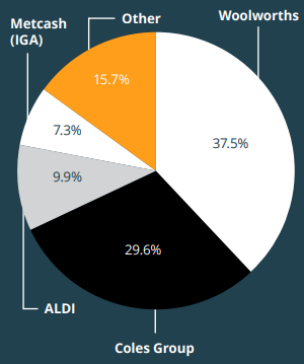 From the above, it can be seen that large chunks of market share are concentrated with a few market players such as, Woolworths, Coles Group and ALDI, which together constitute more than 75% of the market.

All of the above data indicates that the Australian supermarket industry is characterized by presence of few large players that dominate the market. There is fierce competition in the market and high spend on promotion and marketing so as to capture maximum market share.

According to IBIS (2018), the supermarket industry of Australia continues to be fiercely competitive with the current players looking at minimizing the costs and streamlining the process so as to attract maximum consumers and capture maximum possible market share. The report predicts that this will continue for coming years as well. Additionally, some of the new players are expected to enter the Australian supermarket industry in nearby future which will bring more challenges for the dominant players.

The industry will face further pressure, especially the brick and mortar stores as online stores become even more popular due to convenience and price competitiveness. This is particularly true of smaller stand-alone stores whose market share is declining steadily as the large, multinational corporations capture the market.

However, as the Australians value quality over price, the specialty food retailing within the market remains lucrative. This can be an opportunity for the players in the market by providing healthy and quality alternatives to the consumers.