Individually, you are required to analyse the given case study, conduct external research and create a report that includes your responses to the four tasks listed below the case study.

The purpose of this individual case study analysis is to further your skills in applying relevant marketing analysis tools. It will also test your ability to identify a range of marketing problems and propose strategical solutions. This will enable you to apply marketing theories and concepts to a “real world” business case.

Koala Boats Company (KBC) is a family‐owned boat building and repairing business based in Coffs Harbour, New South Wales. Operating since 1961, KBC designs builds and repairs many kinds of luxury and recreational boats. They operate three distinct business divisions. Their ‘small vessels’ division creates a line of hand-built rowing boats, canoes and sailboats, which are sold to consumers who personally use them for racing, fishing or other recreational purposes. The maximum competition KBC faces in Australia is in this segment as there are at least three other companies that have grown substantially in the last few decades and pushed KBC’s market share down. They have been able to achieve this primarily by offering lower-priced alternatives (by importing cheaper inputs, using technology-intensive methods of production or offshoring production completely). KBC, on the other hand, takes pride in supporting its Australian suppliers and the Australian workforce by keeping manufacturing local.

KBC’s second business division manufactures ‘medium vessels’ that are luxurious and expensive, such as cruisers and catamarans. These boats too are mainly sold to end-users, but a few of KBC’s customers are tourism and hospitality businesses that lease out the rooms or boats to an elite clientele. Historically, this is KBC’s oldest division and was its primary focus and revenue driver until the year 2000, when the ‘small vessels’ division was launched. Even now, over 50% of KBC’s revenues come from this division and KBC is the market leader in this category by a huge margin. It has been KBC’s conscious decision to stay ahead of the technological curve by continually innovating and using newer materials to improve the longevity and reduce the costs of their boats. In Australia, KBC was the initiator of using fibreglass instead of traditional materials, such as wood and steel, for boat making. Lately, KBC has been spearheading the move to advanced material such as Kevlar and carbon fibre. Of course, these advancements come at a high cost, which KBC has been able to pass on to the consumers in this category.

‘Repair and maintenance services’ constitutes their third business division, and it serves businesses as well as final users. Questions have been raised in past business meetings about whether KBC should focus on boat building, rather than repairing, as the latter is mostly labour intensive and wage rates in the country are quite high. Thus, this doesn’t allow for huge profit margins. While only about 20% of KBC’s income is generated from this division, the decision was made to continue it as it contributes to increased customer satisfaction. KBC is the only big manufacturer offering these services in a market that is otherwise unorganised and scattered over numerous small repair businesses.

Till 2010, this Australian industry was in its growth stage, with more and more of the population entering upper-middle and upper classes while working a smaller number of hours weekly. More and more people were turning to water-based recreational activities and owning a boat became a prestige symbol. Though this decade did not bring substantial growth for KBC, until 2015, KBC was enjoying decent profits. It had managed to build up strong reserves of cash and keep its employees extremely satisfied by paying them well above the industry standards. Thanks to this, KBC’s employees have been immensely loyal for decades and KBC attracts the best talent from the nation.

However, the last few years have not been too kind to the Australian economy. Unemployment is on the rise with some manufacturing moving offshore, and many industries are experiencing recession (especially the mining, construction and automobiles industries). The service industries of tourism, hospitality, arts and recreation, and education have been faring better. These sectors have been able to experience growth mostly due to foreign income being spent in Australia. Other sectors such as defence and health, which are largely driven by government spending, have also been stable. The Australian households haven’t been experiencing healthy wage or wealth gains and their purchasing power, on the whole, is decreasing. Though the government is trying out various means to revive the economy, it warns that the next few years will be tough. As a result, consumers’ preferences have continually shifted from luxury and more expensive products to basic and less expensive ones. Due to the gloomy economic outlook, consumers have even tended to postpone purchases of consumer durables, preferring to restore or refurbish them instead.

Though some neighbouring emerging economies show the promise of growth, KBC’s boats are not competitive in those markets due to high production costs and unsuitable foreign exchange rates. The consumers in those countries are price sensitive and local producers there already enjoy the advantages of low costs, established marketing channels and favourable brand reputation.

Step 3: Present your responses to the above in a professional report structure with the following headings: Title Page

In preparing your report, you will need to use at least 5 sources of information and reference these in accordance with Kaplan Harvard Referencing Style. These may include corporate websites, government publications, industry reports, census data, journal articles, newspaper articles, and textbook material. 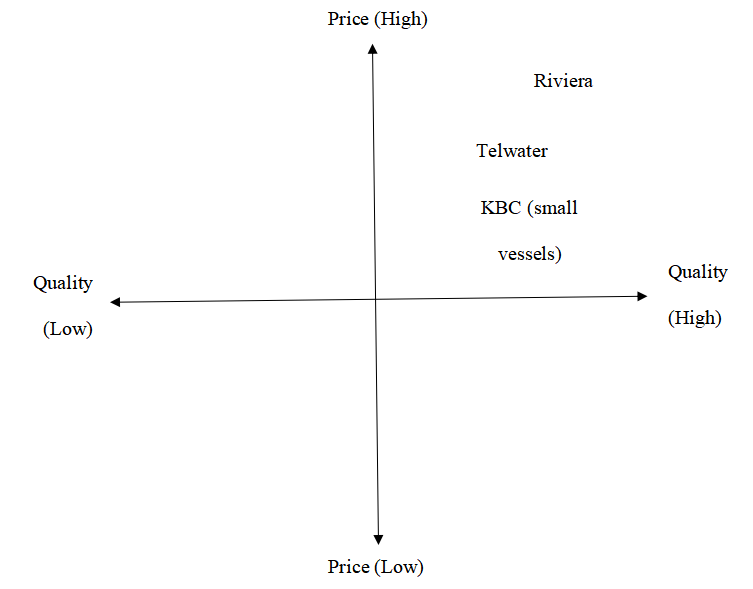 From the above image, it is clear that Riviera stays at the top in the perceptual map in terms of price and quality, as it manufactures luxurious boats and sells it at a higher price (Rivieraaustralia, 2020). Telwater is the largest and leading manufacturer of aluminium boats in Australia (Telwater 2020). Thus, it also makes high-quality boats and sells it for a higher price comparing to KBC. KBC faces tough competition from these two companies, as it manufactures boats with the help of local employees and local suppliers that increase the cost and so the price is.

BCG matrix refers to a business planning tool that is used for displaying a brand portfolio. It helps to categorise the products based on their market share and growth rate (Madsen 2017). In the above image, repair and maintenance service of KBC is put in the question mark category, as currently, it generates 20% revenue of the company. However, this category helps the firm making satisfied customers. Thus, by investing in this category effectively and giving it a close consideration, in future, KBC can increase the service range by market penetration and can transform the repair and maintenance service into star products, as other big boat manufacturers do not offer such a service According to Kader and Hossain (2020), stars are the products that have high market share and high growth rate while cash cows are the products that need support for managing their present market share.

Medium vessels are the star product of KBC, as it generates maximum revenue for the company. Besides, the company is encouraging the growth of the category by innovating continuously. Small vessels come under the cash cow category, as currently, the market share is low due to competition. However, with the necessary investment and planning, KBC can turn this product into a star in the future.

The Ansoff matrix helps business leaders and marketers a simple and quick way of thinking about the growing risks. The matrix talks about four growth strategies including market development, diversification market penetration and product development (Schawel and Billing 2018).

Product development emphasises on launching new products to the existing market. When the company has a strong understanding of the current market, it can innovate new products.

KBC innovates the products in the ‘medium vessels’ category continuously as per the changing needs of the customers and thus, it excels in this division. Thus, product development is a suitable strategy for the company by investing in R&D and using alternative materials for reducing the cost of production and so as the price. It can facilitate the firm gaining market share in Australia.

Market development refers to the strategy of selling existing products in new markets. It is a suitable strategy when the company knows that the customers in the new market are profitable (Filippov 2017). However, in the case of KBC, the neighbouring developing countries may not be a profitable option for the company to enter, as the cost of production in those countries is high and the foreign exchange rate is also not suitable.

Market penetration focuses on driving sales of the existing products into the existing markets. It can be carried out in many ways for increasing market share in the existing market. It can be conducted by reducing prices, increasing distribution and promotional efforts or by acquiring a competitor in the market (Gurcaylilar-Yenidogan and Aksoy 2018). KBC can increase the market share of its 'small vessels' category by reducing the product price. In this product division, the company is mainly facing challenges due to the increasing market competition from three competitors, who are using alternative materials and advanced technology as well as outsourcing manufacturing for reducing the production cost and offering boats at a lower price. Therefore, by focusing on using the latest technology and alternative materials for making boats, KBC will be able to offer the boats at a reduced price and regain market share in this category. Thus, market penetration seems the most suitable strategy for KBC to implement. KBC needs developing products in the medium vessels category and reducing the price of the small vessels category for ensuring growth.