Bachelor of Tourism and Hospitality Management

Download from LMS a copy of CROWN RESORTS LIMITED (the Company) annual reports for the financial years 2019, 2018, 2017, 2016 and write a report of the Company under the following sections.

Use the below Format:

This section should be written up after your report has been written. It should give a summary of your main findings about CROWN RESORTS LIMITED in terms of its Profitability, Liquidity, Asset Efficiency, Capital Structure and Market Performance over these years

This section should give the reader a broad sense of the Company’s operations (for example what its main operations are, the number of locations, the regions they operate in, the industry and competitors etc).

Such information is easily available from the internet and from the Directors’ Report in the 2019 annual report. Please reference your sources.

Using a trend analysis and the 2016 year as the base year, calculate the trend for Total revenue and net profit after tax up to including the 2019 financial year.

Graph the trends from your findings from the 2016 year and up to and including the 2019 financial year. (10 Marks)

From the Company’s 2019 and 2018 financial statements and notes to financial statements, calculate the following ratios based on what you were taught. Explain what the ratios mean in general and comment specifically on what they tell about the Company’s performance. Examine and explain how the ratios are trending and comment/explain if the trend is favourable or not.

Calculate Current Ratio and Quick Asset Ratio for the years 2019 and 2018. Show it in a table as in the previous sections and comment on the Company’s liquidity position.

This section sums up the key points of your discussion and summarise the key findings, outcomes or information in your report.

The following report discusses Crown Resorts (ASX: CWN) which is one of the largest players in gaming and entertainment market of Australia. The period of analysis is 2016 till 2019 and various line items will be analysed to determine how the company is performing with respect to the Profitability, Liquidity, Asset Efficiency, Capital Structure and Market Performance over these years.

The analysis will begin by understanding various liens of business that generate revenue for the company and determine the trend of these line items. Then the analysis will be done using vertical analysis technique whereby the profit and loss statement as well as balance sheet items will be studied as percentage of a base, such as, revenue, total assets or total liabilities. The report will also perform a brief ratio analysis to see the company performance during the analysis period.

Crown Resorts (ASX: CWN) was founded in 2007 and is headquartered in Melbourne, Australia. The Company is one of the largest players in gaming and entertainment market of Australia.

For the financial year ending June 2019, the Company reported a normalised net profit after tax of $368.6 million, a decline of 47% from the previous year. The decline is mainly attributed to the subdued market conditions. As of 2019, the Company had more than 18,500 employees.

Using a trend analysis and the 2016 year as the base year, calculate the trend for Total revenue and net profit after tax up to including the 2019 financial year.

Crown Melbourne reported normalised EBITDA of $589.5 million, a decline of 8.6% from 2018, mainly on account of decline in VIP program play related revenue and increase in costs.

Crown Perth reported normalised EBITDA of $221.8 million, a decline of 10.8% from 2018, mainly on account of decline in revenue from major components like VIP program play, main floor gaming and non-gaming and increase in labour and fixed costs.

Crown Digital reported normalised EBITDA of $26.1million, a decline of 27% from 2018. It must be noted that the Company sold CrownBet in February 2018. BetFair Australasia indicates strong growth despite point of consumption taxes while DGN Games indicates growing revenue but also a challenging environment with intense competition and high acquisition costs.

A detailed break-up of 2019 revenue is presented below:

The following table presents total actual revenue from various lines of business for the period of 2016 to 2019:

For convenience of analysis, the data above is presented graphically: 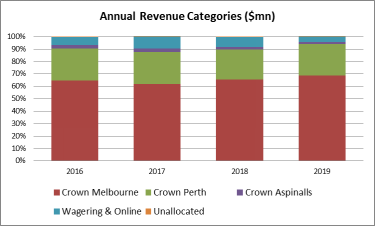 From the first graph, it can be seen that while 2018 was the peak year during the four year period, 2019 has registered a decline for all categories.

From the second graph, it can be seen that the major revenue is drawn from Crown Melbourne, followed by Crown Perth. Together, they form major chunk of the revenues with remaining coming from Crown Aspinalls, and Crown Digital.

Crown Digital’s share has registered a continuous decline from 2017 that needs to be analysed as it can be a major source of revenue. The decline in 2019 was steep with revenue declining from $293.0million to $130.1million, a decline of 55.60%.

Crown Aspinalls forms a very small portion of revenue but has registered decline as well.

The decline in revenue from Crown Melbourne is of concern as it is the top revenue grosser for the Company and 2019 has indicated a steep decline of 5.73%. Crown Perth has also indicated similar pattern.

The following table and graph indicates NPAT and revenue for the analysis period of 2016 till 2019: 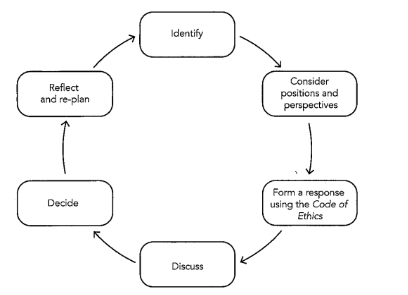 The above graph clearly shows the continuous declining trend in group revenue which is mainly due to subdued market sentiment that people are spending less on entertainment and luxury. However, a comparison must be made to peers to see if the trend is similar.

With respect to NPAT, 2017 was the peak year where despite the declined revenue, the NPAT increased almost two-folds. However, the same declined steeply in 2018 and then again in 2019 showing dismal performance. NPAT as percentage of revenue has alos been declining indicating increasing costs or other obligations.

The below table presents all the figures in profit and loss statement of 2019 as percentage of revenue for the year:

The utilised formulae as well as figures have been presented in table above. It can be seen that all the three ratios have registered a decline from 2018 to 2019.

The above report presented a detailed analysis of Crown Resort company in Australia. The main focus points were revenue and profit. It was seen that there are multiple revenue categories and same were discussed in detail, including various revenue streams under each line of business. Further, the trend in revenue was also studied where the top revenue grosser Crown Melbourne showed a concerning decline in revenue as well as EBITDA. It was also seen that Crown Digital is also contracting although Betfair Australasia is doing well. The company is focussing on increasing the revenue from this segment as it seems promising.

The analysis then moved to vertical analysis which indicated that costs and expenses are very high proportion of revenue indicating lower net profit margins. Hence, costs need to be controlled.

It also indicated that non-current borrowings are more than 30% of the total liabilities and along with current borrowings; this comes to 42.52% which is very high ratio of loans. This can be particularly concerning given the revenue and profit situation of the company.