ACOM 117 Guidelines for the Final Report

During this course you will study the structures and the functions of a variety of body systems and the role they play in maintaining a healthy body.

In this report you will be required to research diseases or disorders that commonly affect people.

Based on the topic that you are given, write a scientific report that may include:

A scientific report should include the following features:

PARTS OF A RESEARCH REPORT

This report has tried to explain Crohn's disease, its causes and symptoms, and its various treatment options. The aim is to educate and guide the patients on how to manage and live with this disease. It is related to the digestive tracts of a patient. The small intestine is affected by the disease. Antibiotic consumption is the only treatment, and there is no cure

Crohn's disease or inflammatory bowel disease affects millions of people every year worldwide, most of whom are diagnosed before age 35. This disease is a lifelong condition that can be treated but cannot be cured. It can ominously affect the patient's life and may result in a massive increase in its financial burden. The report is a small attempt to increase awareness regarding the disease, enabling the patients to manage it better. The condition is complex and needs a checkup. (Petersen, et al. 2017)

1. History and Beginning of Crohn's disease

In the early 1930s, any disease associate with the Small Intestine is diagnosed as Intestinal Tuberculosis. Then a panel of three doctors – Burrill Crohn, Leon Ginzberg, and Gordon D. Oppenheimer collected information from 14 patients with symptoms like diarrhea, fever, vomiting, abdominal pains, and cramps, weight loss, etc. These symptoms are not the result of any known illness and already identified diseases. Doctors further named it as a new disease, which was initially known as Ileitis and later on named as Crohn's disease. (Sirois & Wood, 2017)

Crohn's disease, sometimes called "ileitis," is defined as a chronic inflammatory bowel disease that affects the digestive Tract. This disease is associated with the Small Intestine, but it can affect other body parts also (parts of the digestive Tract), starting from an individual's mouth to anus to the beginning of the Large Intestine. (Bernstein & Forbes, 2017)

As in other diseases, the effects of Crohn's disease vary from one individual to individual. Most commonly, Crohn's disease affects the last portion of the Small Intestine. In other cases, the disease is found in the colon part of the Large Intestine. These are the most common areas affected by Crohn's disease in the majority of cases. Also, this disease's symptoms can vary from mild to very severe, depending upon the patient and its medical History. In some patients, the disease develops slowly and gradually; however, it can come suddenly without any warning symptoms in other patients. Patients will show no or significantly fewer symptoms most of the time; on the other hand, for some patients, this disease can alter their whole life and can cause severe deadly complications. (Bähler et all. 2017)

The causes of this disease are yet unknown, but research is going on to identify the common reasons for this disease.

People affected by Crohn's disease globally in 2017 were 6.7 million. The disease is not gender-specific, and patients can be male or female. The disease is also not age-specific; bur, it is most common in adolescents, and most of the patients diagnosed with this disease exist in the age group between 15 and 35. Smoking, Stress, Pollution and environmental concerns, Dietary habits, Hereditary and genetic factors may result in increased chances to contract this disease  People with this Illness in their immediate family have higher chances of contracting this disease. (Zielińska et all. 2019). 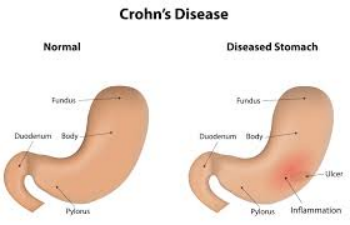 We can see in the diagram that the normal stomach has no inflammation. Moreover, the diseased stomach has inflammation in red. This indicates the chronic infection, which can be diagnosed by specific few symptoms at home and after that by medical checkup and diagnose.

The symptoms of this disease like diarrhea, vomiting are prevalent in nature and are associated with lots of diseases and issues, making the identification of Crohn's disease difficult and often delayed. Physical Examination followed by blood tests and laboratory testing. Physical Examination by a doctor includes an assessment of patients' overall health by checking their Blood Pressure, Heart rate /pulse, and Weight. (Akram et all. 2019)

Suppose all the other illnesses associated with these symptoms have been ruled out. In that case, doctors will also look for any signs that may indicate the probability of Crohn's disease-like swellings, etc. The doctor will also review the old medical History of the patient and his family to indicate Crohn's disease's chances of occurrence. (Eberhardson, et all. 2019)

The figure has shown the ulcerative condition, with the areas of spasm. Patients get to know about the condition from medical endoscopy.

There is no approved cure for this particular Illness. Doctors' use a variety of treatments and medications and sometimes surgical methods depending upon the symptoms and complications associated with the patient. Some of the commonly used medication techniques and procedures are enumerated below:

To give the intestine a chance to heal, sometimes doctors also prescribe diets and liquids. Further doctors often suggest the use of Corticosteroid different prescribed Immunomodulation Surgery.

Living with any disease can never be easy. Life for Crohn's patient includes constant worry about what to eat and what not to eat. The first step to managing this disease is to reduce stress. Also, familiarize oneself with one's dietary needs. Please keep track of the foods that cause problems and make sure to avoid them in the future.

When eating raw foods and vegetables, try to remove their skin first. Choose foods that are soft like banana, grapes. Other foods that are safe to eat are – Spinach, Pumpkin, eggs, fish, oats, Curd, etc. Some foods not be included in diets are fried and packed foods, alcohol, caffeine, carbonated drinks, and Beverages. Avoid spicy foods and foods that result in gastric issues like beans, Chickpeas, Cabbage, etc. needs to be also avoided. (Malmborg & Hildebrand 2016)

Peculiar condition of this case: Patient has been given steroids mixed with Ayurveda medicines for around one year, resulting in very high resistance against most normal medications and poor immunity. (Bernstein, et al. 2019).

Over the years since Crohn's disease were known, huge advancement has been made by the scientists and doctors in understanding this disease. Scientific developments in the field of genetic science and the study of medicines have added fresh knowledge in estimating the causes of the diseases and have given new research options in finding the cure for this disease. That day is not far when the cure for this disease will be found.

Until the cure for this disease is not found, increasing awareness of the disease regarding its cause and symptoms and preventive measures to be taken can help the patients and doctors better manage disease and treatment.