General information about the assignment

Background of the assignment:

Publicly listed companies must publish online an annual report. This report includes financial statements and other information as required by the standards set by the AASB and other accounting bodies. Students of ACC202 are expected to be able to demonstrate an understanding of the accounting standards and show how the material studied in this subject relates to the real world.

To successfully complete this assignment, you will need to:

Important requirements for completion and submission of this assignment.

Access the latest available financial report (no earlier than 30 June 2019) for the company you chose. Include the following reports in the appendix section of your report.

Answer the following questions about the company and its financial reports. When quoting numbers, use the group/consolidated data.

Part 1 – General information about the company

What is the name of the company and its ASX code? Where is its main office located? What is the website address? What is its industry type? Find a chart that shows the share price over the last 5 years. Over this period, have there been any sharp rises or drops in the share price? If there have, can you find an explanation? Copy the chart to your Word document and print any supporting information and include in the appendix.

What is the company’s main source of revenue? If your company sells a physical product, what was the gross profit for the current year and the previous year? Locate at least two articles relating to the company earnings. One of these must be from an independent source. (Include these articles in the appendix). Using these articles, what events or company policies etc have impacted most greatly on company earnings over the last two years? Read the chairman’s report and the CEO’s report. What are the company’s main strengths and weaknesses? Based on these, prepare a forecast of revenues for the next two years. Please give reasons why you have come up with this answer.

Which group of tangible assets (property, plant and equipment) has increased the most over the last two years? What is the reason for this change? Looking just at the last year, were any assets revalued or impaired? If impaired or revalued, what is the reason for this? Please support your answer with information from the published report and an article or company announcement if relevant (Include in the appendix).

Does the company have any leased assets? If so, what are they and what did these assets cost the company in the last year?

Business organizations work to achieve the predetermined goal for the shareholders by conducting better final performance. Various uncertain factors exist in the market that can affect the business at huge scale. Hence management of the company has to implement the business strategies and business policy to face such uncertainty. This report provides the financial analysis of the Rio Tinto Group (RIO.AX) and it includes the general background of the company, analysis of the revenue, property, capital assets and provision, contingent liability (García-Gómez, & Pérez-Cebada, 2020).

Part 1 General information about the company

Rio Tinto Group is engaged in finding, mining, and processing mineral resource all across the world. It belongs to the industry of other industrial and metals & mining in the sector of the basic material. It has a full-time employee of 46000. It offers aluminum, silver, molybdenum, copper, diamond, gold, titanium dioxide, borates, salt, iron ore, and uranium. This company is also involved in alumina production, primary aluminum smelting, rutile, and zircon mining.  It was founded in 1873 and is headquartered in London, The United Kingdom.

The share price of the company has been increasing from the past 5years. It has grown the business of the company twice and provided a higher return to the company. The company has paid the divided each year as it has earned higher profitability in all the years (Rio Tinto Group 2020)

In the first quarter of 2016, the company's share price has been reduced by 12% which due to market changes and poor supply of the service. Then from the third quarter of 2016, the company has increased the performance and hare prices have been increased. In the last 8 months company's share prices have been reduced due to the pandemic situation that has been raised due to COVID-19. The global economy has slow down and affected the business of all sectors adversely (Challoumis,2019). 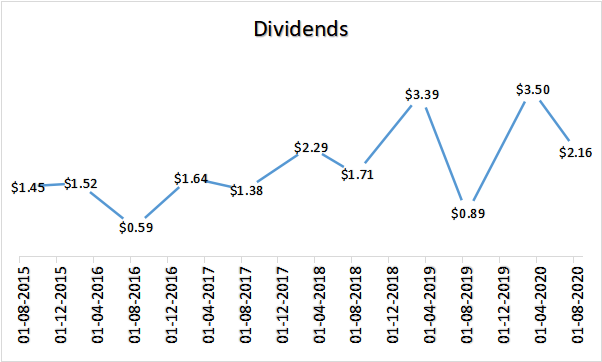 The dividend has been distributed by the company each year and it has been raised by 2 times from 2015 to 2020. The company has paid divided $ 1.45 to $ 2.16 which show the higher return to the investor or shareholder of the company (Rio Tinto Group 2020)

Rio Tinto company belongs to the other industrial and metals & mining industry in the sector of the basic material. Its main source of revenue is aluminum, silver, molybdenum, copper, diamond, gold, titanium dioxide, borates, salt, iron ore, and uranium. The revenue of the company has been increased continuously.  Revenue has grown from 33.8 million to 43.16 million in 2019 which shows better financial performance and demonstrates the financial strategies of the company.

In 2020 the revenue of the company has been reduced as the price of the Iron ore has been reduced by the government and global primary aluminum has also reduced its sales due to decreases in the sales prices. It has been done because semi-fabricated aluminum has increased the export from china. In 2016 the company's sales have been higher due to a higher share of the market and increasing volatility in the price of iron ore. In 2019 it can be observed that there is a sharp increase in segment revenue because there was raise in global prices, environmental policy in china while the sale of iron ore has been dropped as supply has been increased (Ширяєва, Cоляник, & Коваль,2020). 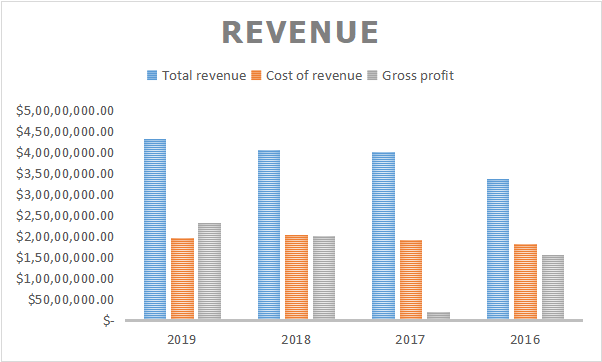 Simon Thompson is the chairmen of the company and stated that the company aims to achieve the industry safety, sustainability performance, capital discipline, and operational performance to invest throughout the cycle, and also providing a higher return to its shareholders. The revenue of the company is higher by 7% in 2019 due to the higher price of iron ore (Robinson, 2020).

As per the market demand expectation management of the company has been expecting the 20% growth in the revenue as the price of the iron ore will be increasing as per the new government policy and it will lead to an increase in the sales of the company. The following are the expected sale of the company in the next two years:-

Property plan and equipment sales by the company for $ 49 million in 2019 and $ 586 million in 2018 which has become the major reason for higher cash inflow for the organization. The PPE has been increased from the last year by 15% now plant and machinery has been purchased by the company to increase the production level. The total increase in the PPE was $ 301 million which shows a higher amount of investment in the capital assets. The company has planned for future production capability so that revenue can be increase by supplying more products (Shad, Lai,Fatt,Klemeš, & Bokhari, 2019)

Impairment for the PPE has been charged for $ 10 million as an indication has been identifying as per IFRS 9 which says that if the carrying amount of the assets and market value of the assets has not been the same then the difference will be charged impairment of the non-current assets. Such carrying amount has to be determined by considering the cash inflow and converting them in present value with the required rate of return. Therefore it can be seen that the company has impaired the capital assets during the current financial year 2019.

From the analysis of the annual report of the Rio Tinto company, it can be observed that the total provision discloses by the company in 2019 is $ 11.10 million while it was $ 10 million in 2018. It has made the provision for the DTA and DTL, loss, and tax expenses of the company (Rio Tinto Group 2020)In the discloser of the notes to account, $ 100 million has been considering as contingent for the payment in the future based on the legal liability pending against the company. Following are the contingent liability of the company in the last two years:-

From the above, it can be seen that the company is having a higher amount of contingent liability. It may or may not require to pay in the future by Rio Tinto. The company has already disclosed it in the annual report so that the economic decision of the user may not affect it.

The leased asset of the company includes the land and building which is used for the office administration and plant & equipment (Vessel). The right to use the assets has been depreciated by the straight-line method. As per IFRS 16 Lease, the total amount of right to use assets is $ 1065 million which has been used for the business (Matei, 2019).

After considering the above report it can be observed and conclude that Rio Tinto has performed well in the past 5 financial years as it has maintained the NP ratio higher while the market was uncertain and government rules have also affected the industry adversely. The company is expecting a higher growth rate in the net profit in the next 5 years. It has used the free cash flow to invest in the capital assets so that production capacity can be increase. It also indicates that the company will supply a higher quantity of the product in the market in the next financial years. It also has contingent liability and provision in the financial position statement but does not indicate that company has generated the poor profit for the shareholder. Provisions are part of the business.