Large projects require detailed planning to achieve success. For this task you are required to submit the plan for your proposal (i.e. Draft Proposal) to address the “wicked”problem identified by the industry expert together with a Progress Report, where you will detail what has been completed so far to achieve completion of the full proposal, which will be submitted in week 13.

Students are required to work in their teams to develop a plan of action to complete the final “product”, that is, the solution-based proposal to address the “wicked”problem. Individually, each member will submit the plan (here called Draft Proposal), which will include:

Although students will work on the points above as a team, they will write their own draft proposals, with their own words, but based on the conversations had as a team. The items of the proposal will inevitably be the same and there will be overlap between students’ submissions - that is fine. It is important, however, that each student writes their own draft proposal, particularly the introduction, where a short literature review is essential and needs to be written individually.

The second part of this assignment is to provide a Progress Report, in which students will provide an overview of how far the team has moved towards the completion of the project. The Progress Report will include:

Suicide is a recognised public health priority in Australia. In particular, the suicide deaths also with suicide attempts are more common in young women, portend risks for future suicide carry significant costs in healthcare burden and productivity losses. More importantly, the period immediately after discharge from an inpatient unit is a time when the rate of suicide risk is at greatest (Discharge and follow-up of a person at risk of suicide, 2020). For this purpose, suicide prevention planning is more important in the case of post-discharge duration. On the other hand, individual mental health problems are not only the reason of suicide because as per recent reports of USA and Greece, but the rate of suicide is also enhancing due to the risk factors like rurality, ATSI status, physical disability and exposure to abuse after post-discharge of care. In this regard, the aim of the research is to reduce the rate of suicide post the hospital care and for this purpose, the researcher is intended to introduce a mobile application for prevention of suicide in Western Sydney local health district to support future development of healthcare practices.

Hospital treated deliberate self-harm (DSH) is very common as a repetition of DSH within 1 year of hospital admission takes place at an average portion of 15% (Stevens et al., 2019). As per the findings, the DSH is associated with a range of psychiatric issues such as the enhanced risk of suicide attempts and death. More particularly, in Australia, deliberate self-harm is accounted for around 6% of entire hospitalised injury cases during 2012-13 (Stevens et al., 2019). There are lots of public health interventions available to prevent the suicidal intentions though the most worrying fact is that, the public health interventions in Australia for preventing suicide have been largely ineffective. As per the findings, the Australian Government spent around $128 million on various suicide prevention activities, however, as per evidence, the activities are not sufficient for changes in suicidal rates (Mental Health Commission of NSW, 2018). This is the wicked problem being addressed in this study that aims to enhance suicide prevention post-hospital care through the implementation of the mobile application.

The aim of the research is to reduce the number of suicidal cases in Western Sydney LHD after being in care and thereby, introducing new mobile application for suicide prevention.

Rate of suicide in Australia:

Suicide can be considered as the leading cause of death globally particularly, more common amongst the young community. In Australia, each year, more than 60,000 people make suicide attempt each year and as of 2011, around 2200 cases of suicides found in Australia and out of this, 76% were males (Lifeline, 2020). However, as per the record of 2018, around 3,046 Australians aged between 15 and 44 make suicides and this shows that the suicidal cases are rising day by day (Discharge and follow-up of a person at risk of suicide, 2020). 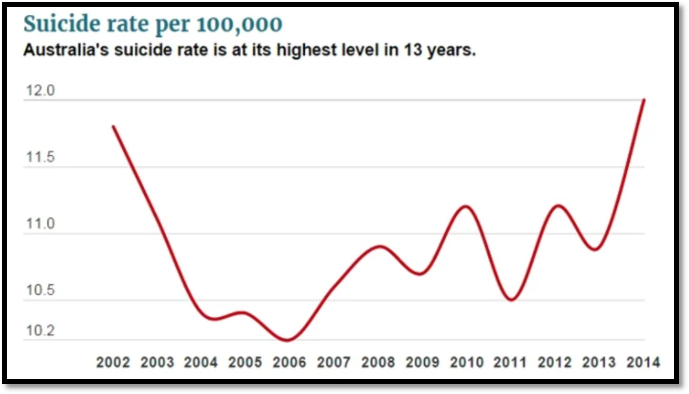 For reducing the rate of a suicidal trend, in the year of 2018, the NSW Government announced to invest $87 million towards Zero Suicide initiatives (Health NSW, 2019).

Suicide risk after the discharge from care is high, more particularly in the first few weeks (Psychiatric Services, 2013). Moreover, 55% of suicides takes places within a week of discharge and 49% of those people died before the first-follow-up appointment (Psychiatric Services, 2013). Thus, discharged patients, being viewed as high-risk of suicide must have immediate solution-focused approaches. Here, according to the viewpoint of Zalsman et al., (2016), follow-up of people who attempt to suicide need to be strongly supported by data and should be included in the national suicide prevention strategy.

Some of the main solution-focused approaches include

Person-centred: Treatment options need to be provided in a personal manner through relationship-building (Itakura & Kato, 2016).

Dialectical behaviour therapy: this is CBT-focused approach to understand the patient's feelings.

Thus, as per understanding, for preventing suicidal trends, it is crucial to consider the treatments that deal with people feelings in terms of people’s emotional growth.

Leading use of a mobile application for suicide prevention

In spite of having various solution-based approaches, the immediate help during the time of crisis can be considered as very critical. According to the viewpoint of Stevens et al., (2019), those who may be experiencing suicidal ideation confront potential obstacles to help-seeking such as not perceiving the need for professional help, cost of services, lack of time or fear of stigma or disclosure. Particularly, 40% of people with suicidal ideation do not seek medical care or may not have access to healthcare services (Larsen, Nicholas, & Christensen, 2016). Here, digital interventions delivered through mobile devices may enhance access to mental health care. Moreover, mobile applications are low-cost, discrete and convenient to use and thus, the applications are suitable for delivering suicide prevention interventions with proper support and privacy during the time of crisis (Martinengo et al., 2019).

As opined by Proudfoot et al., (2010), consumers are rapidly using mobile applications, proactively seeking various apps for managing their personal health. As per the recent data, the number of consumers using health applications on mobile and tablet apps in Australia has grown from 30% in 2016 to more than 47% in 2018 as shown in the figure (Statista, 2020). 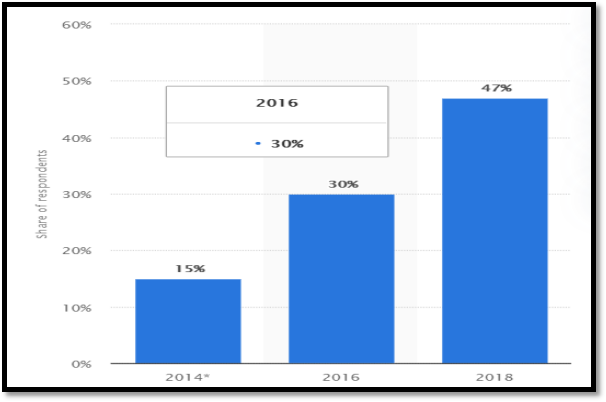 Figure 2: Share of the consumer using health applications on mobile in Australia 2014-18

Moreover, in Australia, more than 88% population owns smartphones and the adaptation of mobile health applications tend to prevent suicide in Australia compared to other countries (Oviedo-Trespalacios et al., 2019). For people with mild-to-moderate mental health conditions using apps to monitor mental health changes are developing in NS, though, there are very few applications available that have been evaluated in clinical trials.

The BeyondNow app delivers a low-burden method of gathering information related to mental health for patients who are at risk of suicide just been admitted to hospital or discharged in Australia (Melvin et al., 2019). Additionally, in Australia, the rate of suicide is more common nearly about four times higher for indigenous people than the non-indigenous community. Here, iBobbly is another social and emotional wellbeing self-help app for young Aboriginal and Torres Strait Islanders that allow keeping mood diary to track mental health condition and thereby, creating own personalised action plan to monitor progress (Tighe et al., 2017).

With the enhancing ubiquity of the smartphones, the health care mobile applications encompass the potential to develop the information access and availability of evidence-based professional support. Here, BeyondNow is one of the safety planning apps that allows users to list warning signs and ways to make the environment safe from a range of suggestions. Here, as suggested by Proudfoot et al. (2010), incorporating mobile apps helps individuals to deal with the suicidal trends more effectively and thereby, enabling healthcare professionals to connect with such people more efficiently during and post medical discharge. 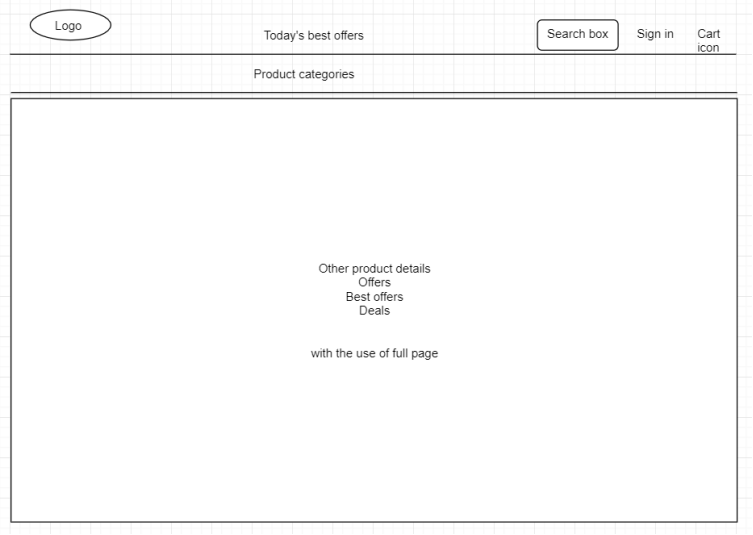 While completing the proposal, our team has experienced a lot of challenges towards the completion of the tasks within a pre-defined timeline.

Due to the outbreak of Covid-19, it becomes difficult for the team to have effective communication through the project. Hence, we have to consider virtual team communication to discuss the topic instead of face-to-face collaboration. However, due to remote collaboration, we have to use technology such as Zoom meeting to share our responsibilities and information amongst each of the team members. However, due to an unstable internet connection, we confronted an effective communication issue which sometimes restricts us to lead the right direction.

Due to the lack of effective communication, we get difficulties in completing the tasks within the timeline. We used video and audio conference calls to connect with each other. Sometimes, such kind of practices leads to reduced motivation among individuals. However, we have used ongoing communication and sharing brainstorming ideas of Google docs to share information.

Being a team member while developing the proposal, my responsibilities are of minute-maker, researcher and team-representation. For this purpose, my role was to prepare the meeting minutes to record the entire information of our communication so that, it can be possible to use the information as referrals. In this regard, during the development of this draft proposal, my responsibility was to gather peer-reviewed journal articles to prepare literature review related to suicidal trends in Australia and available mobile apps. Moreover, for healthy completion of the project, I was responsible to summarise required information for future references so that, it can be possible for my team members to analyse data effectively.

However, due to the lack of effective communication skills, I felt a lot of difficulties during this pandemic situation. During this time, we have to communicate virtually and I felt difficulties in sharing my information with others. As my responsibility is to review the literature, my entire teamwork also delayed due to this weakness. Thus, I need to improve my effective communication skill which will help me to share information with others fluently and thereby, contributing to the successful completion of tasks within time.